In previous blog about one of the most famous figures of Serbian enlightenment, we spoke about Dositej Obradovic’s search for knowledge and changes of heart regarding his own identity as a scholar. In this part, we’ll be getting a bit deeper into what exactly Dositej actually left behind- and how it truly impacted not only his contemporaries, but continues to have influence on today’s life in Serbia as well.

We mentioned how Dositej experienced both worlds: ecclesiastical-monastical and secular-worldly. He was keen on finding a way to enrich both ways of life, as he firmly believed that “good seeds” could be found in common life, which the church can further develop for itself, and vice versa. That is where the idea of educating the commonfolk becomes so important to him. Dositej could clearly see all the good qualities of his people. He strongly believed that, after a long period of hopelessness and enslavement during strict Ottoman rule (and, mind- at this point, the Ottomans were still in power on Serbian territories- less so than before, but still quite a powerful force), only good education and literacy could grant sure rebirth of the nation. He especially encouraged children to be sent to schools, and furthermore, for those schools to have wholesome and quality education programs developed. 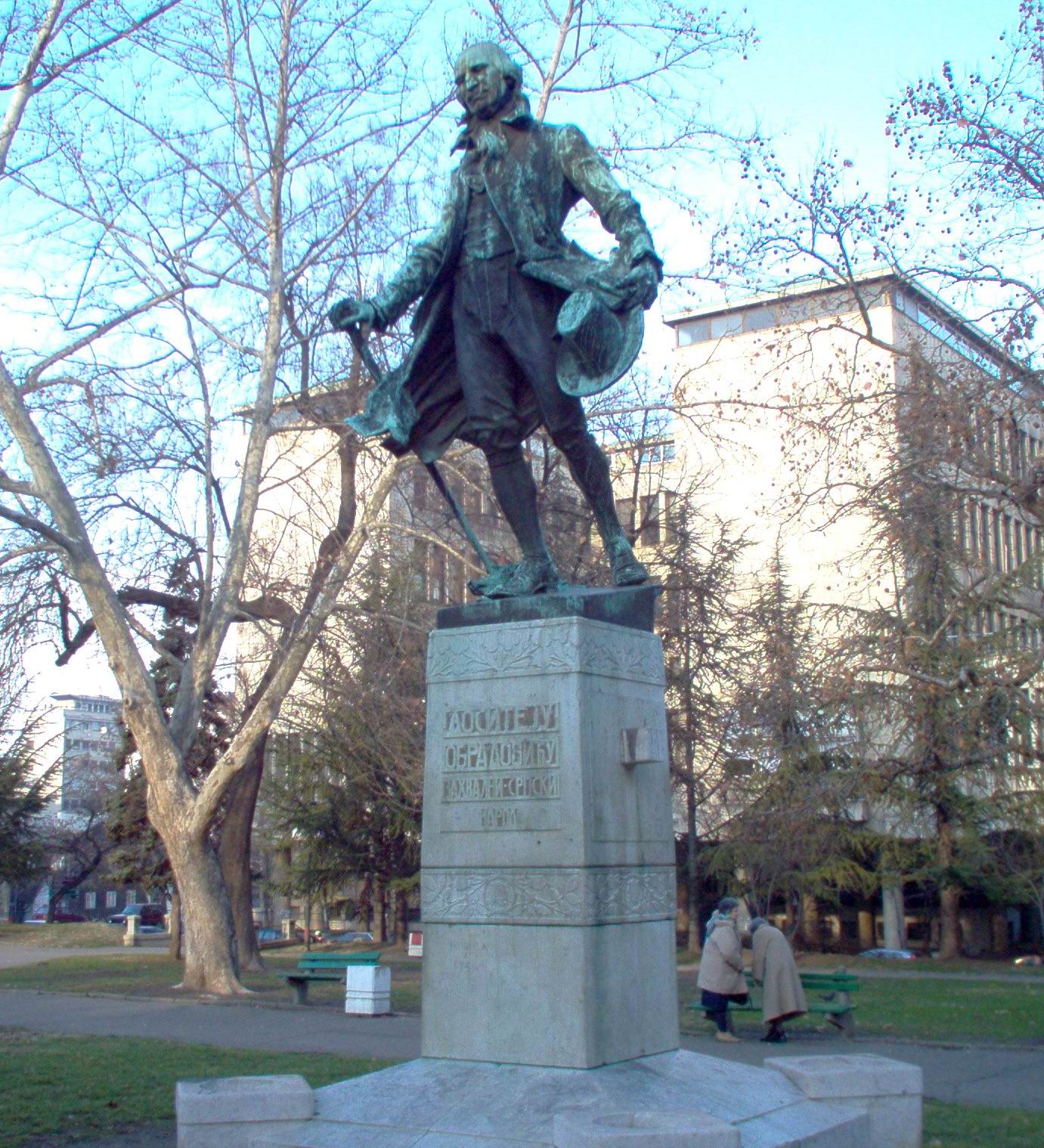 He also encouraged female children to be schooled, which was a very radical stance, as female children often stayed at home and helped other women with housework, while male children were sent to school, manual work, or for an apprenticeship to learn craft. Dositej constructed an image of an ideal Serbienne: an educated, graceful individual, and said: “Let each of you now envision, what joy would be having such daughters, wives, and mothers!” A perfect, educated family consists of educated family members, and thus, it was necessary for woman, “pillar of the household”, to be just as educated.

Another of Dositej’s great achievements was how he changed the way Serbian language is used, especially written language. He believed that scholars should write in a simple, common language that everyone could understand, which would result in all people developing good deduction skills and overall better ability to think for themselves, without needing an authority (e.g. church) to tell them what and how to think. Dositej’s work paved the way for later Serbian language reformers, such as Vuk Stefanović Karadžić, and both understood how having a developed common language could help in overall development and strengthening of a nation and state.

In his written works, Dositej mostly used old church Slavonic, but certain researchers also noticed how his early writing style included many anglicisms and borrowed words with elements of Russian as well. As the time went on, those borrowed words diminished and Dositej began using predominantly Serbian words and phrases. He also emphasized the importance of well-developed and concise grammar rules, which impacted both written and spoken language: he believed that it would be crucial for overall prosperity of Serbian folk in the XIX century. Ideas such as these surely began as early as XVIII century enlightenment beginnings, but in Serbia, they were developed, interpreted and applied in ways that Dositej customized himself.

He wrote quite a few works, some of the most famous (and still parts of elementary school curriculum even today) being “A letter to Haralampije” (Pismo Haralampiju, 1783), “Life and Adventures” (Život i priključenija, 1783), “Councils of Common Sense” (Sovjeti zdravago razuma, 1784), or “Rise, Serbia” (Vostani Serbije, 1804). He spoke many languages, including Italian, Greek, Latin, German, English, and French, and he translated many foreign works into Serbian as well (some of them being Aesop’s Fables, or Francesco Soave’s Ethic). 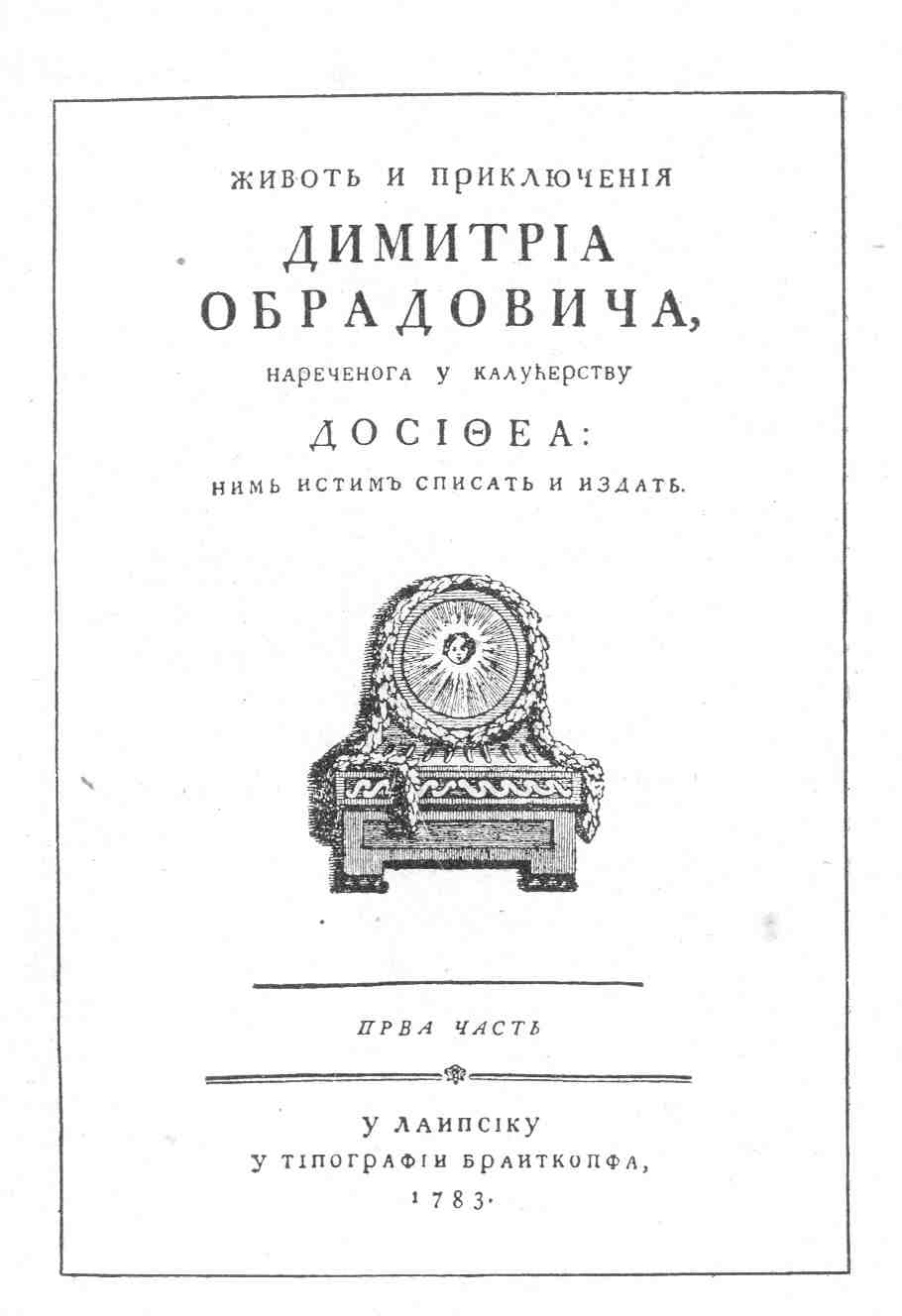 At the beginning of 1811., Dositej became first ever Minister of Education in Serbia. Sadly, he wasn’t in that position for too long, since only a few months later, at the end of March of the same year, he passed away at 71. He was buried in the front yard of the Cathedral Church of St Michael in Belgrade, and some decades later, his successor in language reformation, Vuk Karadžić, was buried alongside him.

Overall, Dositej Obradović had immense influence on education and Serbian language, which in turn rapidly improved overall state and organization of schools and curriculum. He also believed that good education resulted in development of healthy moral standards and values, which also influenced in healthy body, good-natured individuals, clear and bright mind, and a “good, noble heart”. His incredible faith in all the good qualities of his people and his constant hard work to provide sources and fertile ground for further development and betterment stays a touching- and motivating- sight to see even over two centuries later. From a young man determined to spend his life alone and devoted to the Holy, he grew into a selfless and tireless propagator of knowledge, and most importantly, knowledge available and ready for all.