When we think of ajvar, the first trigger is certainly the famous, widely known, Leskovac ajvar. With the designation of protected geographical origin, this product is even better positioned on the market, however, as the manufacturers say, it gained the trust of consumers long before that label. The greatest merit belongs to the quality of the paprika itself - ajvaruša.

Out of 13,000 hectares under vegetables in the Jablanica district, only paprika occupies 2,000. The Kurt Gate, which is used in the fall to prepare a hot spread, is produced on 800 hectares, of which only 200 are in a closed form of production - under greenhouses. The fertile, sunny and water-rich Leskovac valley provides excellent conditions for growing this species.
For successful production, healthy seedlings are very important this is the basic precondition for obtaining quality fruit. Excessive addition of fertilizers disturbs the ecological balance, while insufficient quantity leads to loss of quality, so it is necessary to rationally and timely apply mineral fertilizers for top dressing. The temperature of the soil during the sowing period should be at least six, seven degrees, and the foil with which the plant is covered increases the air humidity and temperature, and helps with germination. Since the peppers are transplanted after two months, the foil is removed 10 days before that operation.
Embroidery or vencara or "goat's horn" legendary Leskovac pepper, which is used to make allspice, ground, crushed. It is also excellent in the kitchen as a dry stuffed pepper because it has an extremely tasty aroma. After harvesting when it matures with a needle and thread it is lowered onto a string and dried. It has long been known that this area received its trademark, which is also considered a Leskovac brand.

It is an extremely old variety that, fortunately, is still preserved and is used extensively in production in the southern part of Serbia, specifically mostly in the municipality of Leskovac. Otherwise, paprika is very sweet, it is also great for frying, so in combination with garlic, it is a real winter delicacy and is traditionally a part of winter food – „zimnica“. Ajvar from this paprika is the most spicy and delicious because it has a lot of dry matter. This variety most likely originates from the Turkish period.

In the processing itself, the most important is the raw material, ie paprika. Producers in the Leskovac area harvest it, mostly from the end of August to the beginning of September, followed by the preparation of ajvar. After that, the fried mass is poured into clean jars, pasteurized and, such ajvar has a shelf life of up to two years, and stored at room temperature. It is only important that the jar is in the shade and protected from the sun. 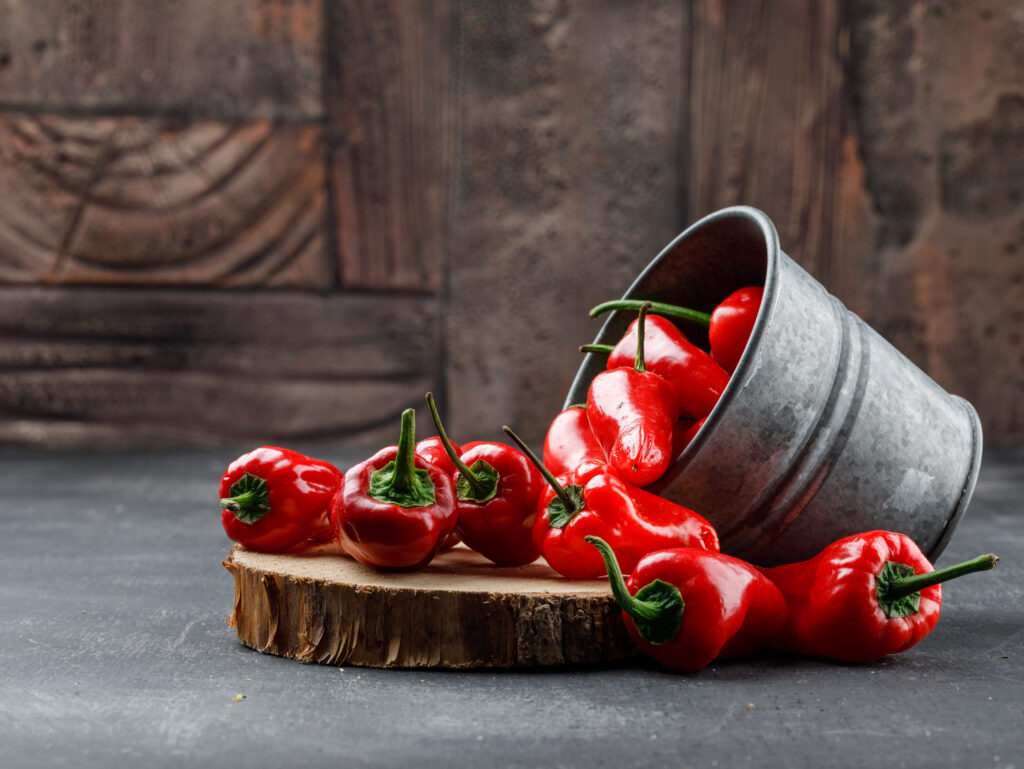 The following is a recipe for preparing Leskovac paprika:
Ingedients:

1. Bake paprika (in the oven, on the hob, on the grill), peel, add salt. Peel a squash, grate it and cut it into large cubes.
2. Put the oil in a larger pan just to cover the bottom, fry the peppers a little on both sides, take the peppers out on a plate and put the tomato and a little celery leaf on the oil to simmer over low heat until you fill the peppers.
3. Beat one egg with a fork, mash the cheese into an egg, split the peppers a little in the middle and fill with cheese (one tablespoon in each pepper).
4. Return the peppers filled in this way to the tomato sherpa, break another egg into the rest of the cheese, then pour it all over the peppers, fry for a few minutes, turn off the heat and let the cheese simmer. Bon appetite !!!