At about 980m above sea level on the mountain Maljen, near the town of Valjevo, a small, pretty, tourist village Divčibare is located. According to the 2011 census, Divčibare had only 141 permanent residents. This mountain field stretches from Crni vrh (the second highest peak of the Maljen mountain, at 1098 m above sea level), through Paljba, Golubac all the way to Veliki Brdo. It is interesting that although it is a mountain field, many people mistakenly call Divčibare a mountain.

All roads lead to Divčibare

Belgrade is only a hundred kilometers from Divčibare, and from Novi Sad you will need to drive a little less than 180 km. Divčibare can be reached in several ways by well-marked roads. It is enough to follow the road signs and you will arrive in Divčibare from almost any place in Serbia very quickly within just 2-3 hours. Therefore, we can freely say "All roads lead to Divčibare". 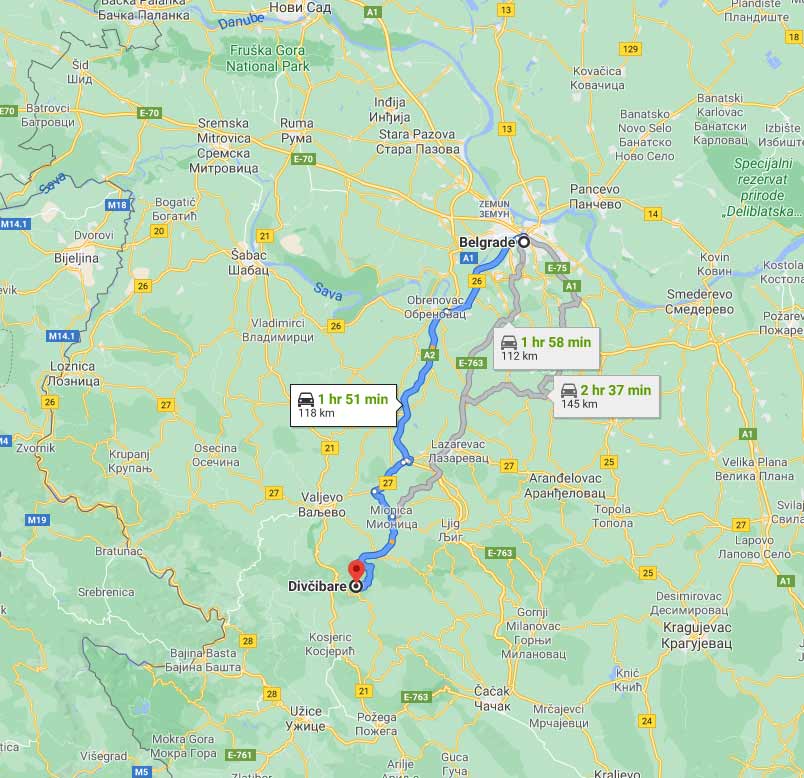 The origin of the name Divčibare

The whole area was named in a memory of the tragic death of a young girl. Namely, Divčibare in translation means girls' ponds, and according to folklore in the swollen river Crna Kamenica, the young shepherdess drowned there and lost her life.

As early as 1476, the name Divčibare is mentioned in the Turkish census of the Smederevo Sandžak. The interesting thing about Divčibare is that Prince Miloš Obrenović, from his Turkish “blood-brother” Deli-aga, bought the entire area with all the masonry buildings. It is known that Miloš himself often stayed in these parts, visiting shepherds to control their work. Precisely, near Golubarske kolibe, there is a natural water source called Miloševa česma.

Divčibare is located in the center of the mountain Maljen, which belongs to the Dinaric mountain system. It is in northwestern Serbia and is characterized by a specific relief. Favorable climatic characteristics and the mentioned specific relief enabled the development of the extremely rich flora and fauna of Divčibare.

The highest peak of Maljen is called Kraljev sto at 1103m above sea level, while the second-highest peak is at 1098m above sea level and it is called Crni vrh. Divčibare is divided into two parts by the plateau Stražara: Divčibare in the narrow sense and Pitomine. From this height stretches a powerful view of the city of Valjevo, completely Divčibare, as well as other heights of the mountain Maljen and other mountains in the area. Precisely because of its location, Plateau Stražara was an extremely important strategic point for Austria in the 18th century. That is where the border with Turkey stretched, and the hill itself was named after the guard made up of bandits, residents of the surrounding villages.

Divčibare is also adorned with a rich water system. Namely, rivers flow through Divčibare, which mainly belong to the West Morava basin and the Kolubara basin. Among the rivers that surround Divčibare is the Crna Reka, which has been declared a strict nature reserve, as well as the Bukovska, Kozlica, Krčmarska rivers, as well as the river Crna Kamenica. In addition to rivers, this area is characterized by the existence of many springs, among which the most famous springs are Hajdučka česma, Čubrica, and Žujan.

The specific geography of the terrain and favorable climatic conditions have favored the development of the very rich flora and fauna of Divčibare. Beautiful, green carpets stretch across the entire landscape. The meadows that adorn Divčibare are decorated with wild roses, thyme, and daffodils, heather and saffron. Meljan itself is known for its coniferous forests with white and black pine, as well as juniper and mountain pine, which is somewhat less stagnant.

An area rich with springs and flowing waters, rich in flora has favored the development of wildlife. On Meljan you can see deer, rabbits, squirrels, as well as two types of martens (white martens and golden martens). The magnificent animal world is complemented by numerous species of birds, so one of the two natural habitats of the mountain nightingale is Divčibare.

Divcibare is a very popular tourist destination. In addition to the long tradition of SPA tourism, in recent times, winter and ski tourism are developing, and two functional ski trails have been made. The ski trail Crni vrh is located on the north side of the mountain peak Crni Vrh within the Divčibare Ski Resort complex.

Divčibare is an important tourist destination for the Valjevo region. Favorable climate, i.e., specific wind rose, made Divčibare an air spa, a place where the human body recovers significantly faster than lung and cardiovascular diseases.

In addition to traditional spa tourism, the Valjevo region and Divčibare have been developing rural tourism in recent years. Nature at your fingertips and a real rural idyll can offer their visitors a unique experience and a completely different perspective and view of the old world. Houses and villages are decorated entirely in the traditional spirit, and visitors have access to numerous activities such as horseback riding and sports fishing.