Serbian cuisine in the 19th century

Serbian cuisine is very diverse, so diverse that it is very difficult to pinpoint the origins of the dishes that are traditionally eaten in a typical Serbian house. Dishes can vary from region to region, as well as ways of their preparation. Whatever the differences are, one thing is for sure - Serbian dishes are plentiful and a portion of good food is eaten at the Serbian table. However, has it always been so?

Throughout its history, the Balkans have been a turbulent area, a crossroads where different civilizations and cultures have met. The influence of different cultures on these areas can be noticed in the example of Serbian cuisine. Numerous dishes that we consider traditional today, we inherited from the Turks, Austro-Hungarians, or Germans. Until the 19th century, simple dishes such as beans, popara, and proja were eaten in Serbia.

To this day, bread has remained an indispensable part of meals in Serbia, so it is not surprising that one of the most appetizing Serbian dishes is just popara. 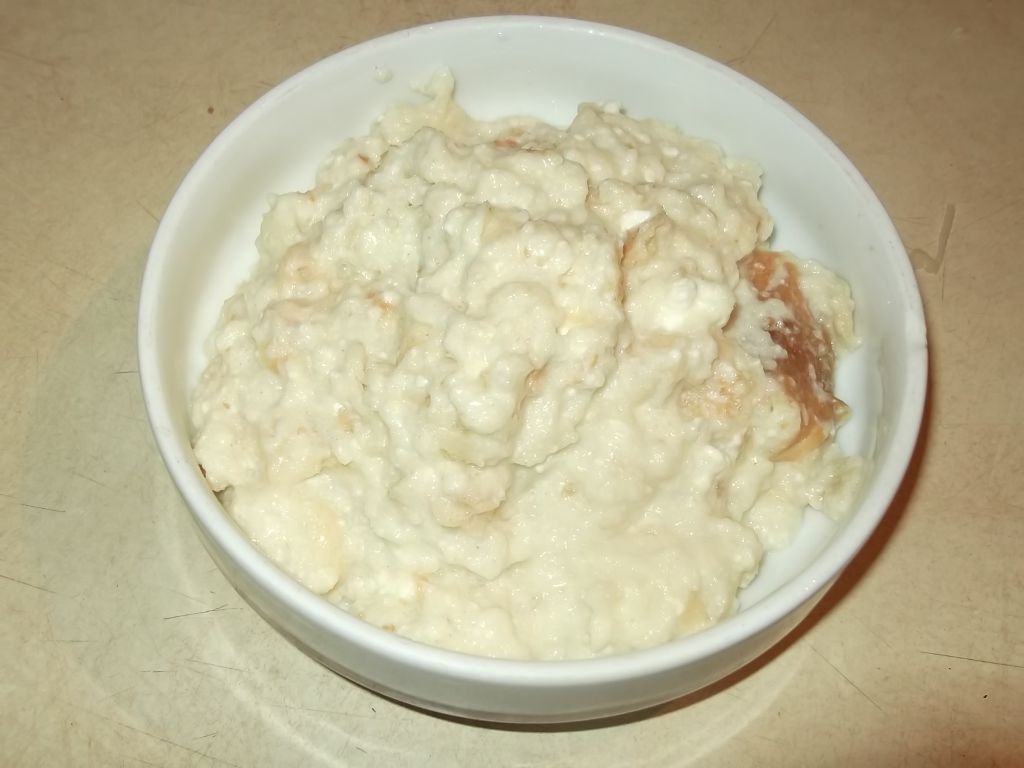 The earliest habits related to the nutrition of people in this area belong to the Slavic heritage. The table of the Slavic people was not as rich as it is today. In Europe, the Renaissance period brought not only a revival of culture and art but also the accelerated development of cuisine. Until the time of Nemanjić, especially during the reign of Radoslav and Milutin (when it is often pointed out that he was the first real, Serbian Renaissance ruler). 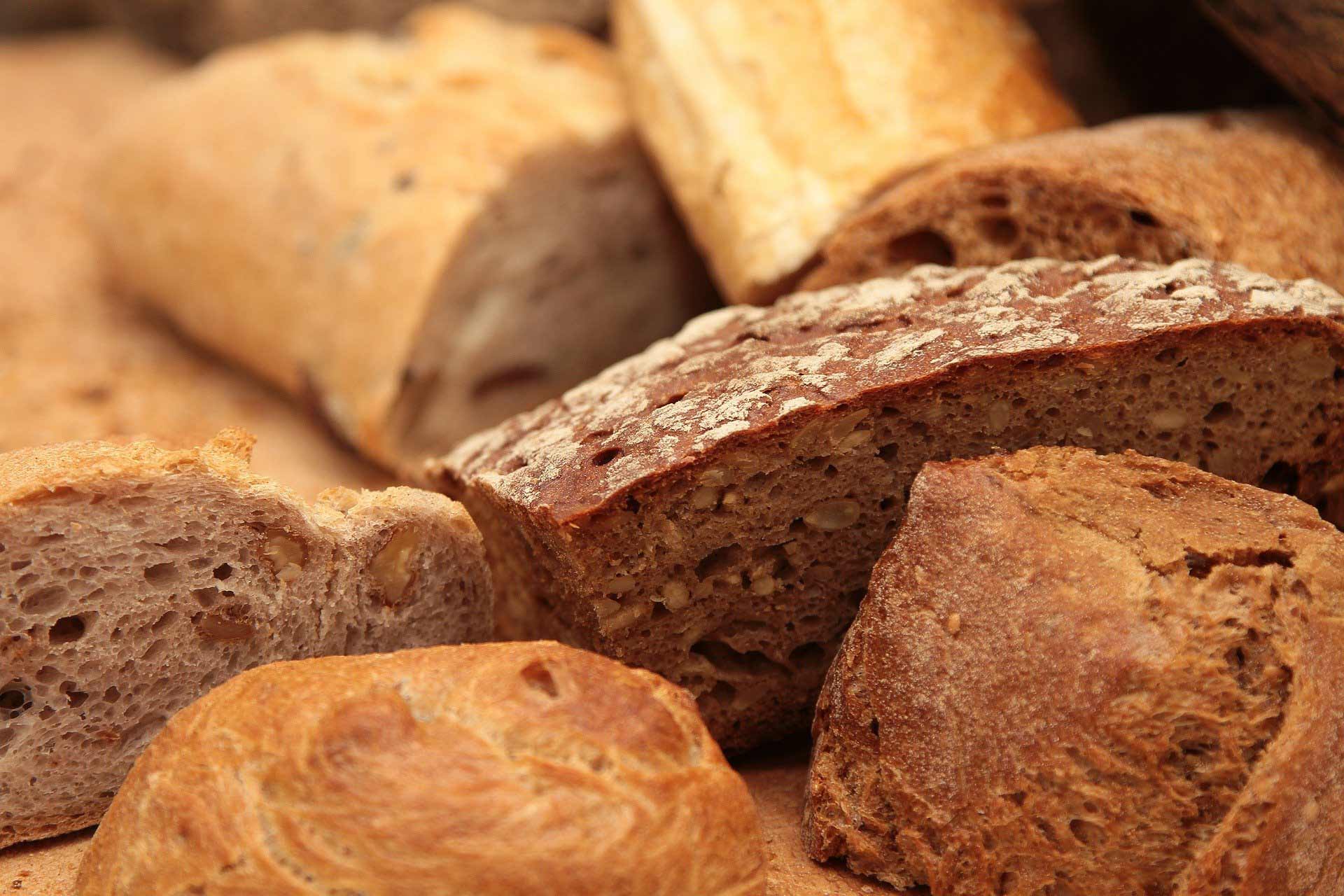 At the Serbian medieval court, food was extremely varied. Fish was brought from the Adriatic Sea, which was later prepared with special fragrant spices and garlic (a tradition of preparing fish that has survived to this day). A special "sorrel" soup was also eaten, as well as caviar from Moruna caught on the Danube. Common to the people and Serbian nobles at that time was the importance they attached to bread in their diet. Bread, the basic food for the people and so important for the diet in the court that there were people who cared only about bread - "bakers". The baker took care of the quality of flour, cereals, and the bread itself, as well as that the bread never disappeared. Quality wine was also enjoyed at the Serbian court, so another extremely esteemed and important person was the "cellarman".

Poultry meat was one of the primary products in the diet of medieval rulers, but it was also present in the diet of the common population. To bring you closer to the choice, but also the possibility of preparing authentic dishes at present, we are giving you two recipes.

The oldest dish with chicken dating from 1196 was served at the court of Stefan the First-Crowned. It is not known on what occasion it was prepared that year, but it is known that it was made of chicken breasts that are lightly salted and rubbed well with honey. The meat is left for 2 hours to cool. It is rolled in wheat flour and fried in fat until it gets a golden yellow color. In a bowl where the meat was fried, pour white wine, garlic, and a little thyme. This sauce is poured over the meat and served.

Stuffed rooster in red wine (1235): A well-fed rooster peels off and is left to spend the night in red wine. It is stuffed with boiled wheat, finely chopped bacon, hard-boiled, and then crushed eggs. Add salt, grease, and place in a baking dish. It is poured with the wine in which he spent the night up to half the volume and baked. He occasionally turns and pours his juice and wine. When the rooster is roasted, take it out of the sauce and transfer it to another bowl. Add a little more red wine to the sauce in which it was baked and boil it. Add the mass of milk and flour and boil once more to the desired density. The rooster is cut into pieces and served topped with sauce and roasted beets.

Prominent Serbian poet, historian, and baroque educator Zaharija Orfelin was the first person to document the first records of modern Serbian cuisine, while the publication of "The First Serbian Cook" will wait until 1855. The collection of records and recipes in 1855 is published in Old Slavonic by Jerotej Draganović. the monk of the Krusedol monastery and the personal cook of Patriarch Josif Rajcic. Twenty years later, the "Great Serbian Chef for the Use of Serbian Housewives" was published in the vernacular. This chef enjoyed great popularity, so as many as 6 editions were published by 1930.

It is these chefs who testify to the development of modern cuisine in Serbia. A real gastronomic revolution happened when potatoes and tomatoes arrived from the newly discovered overseas countries. Potatoes arrived in Serbia at the beginning of the 19th century, when they were brought from England by Dositej Obradović. Before potatoes and tomatoes, beans, corn, and paprika, which was called Indian pepper, arrived in Serbia. Indigenous cereals from these areas are wheat, barley, rye, oats, spelled, and millet, while buckwheat later appeared. 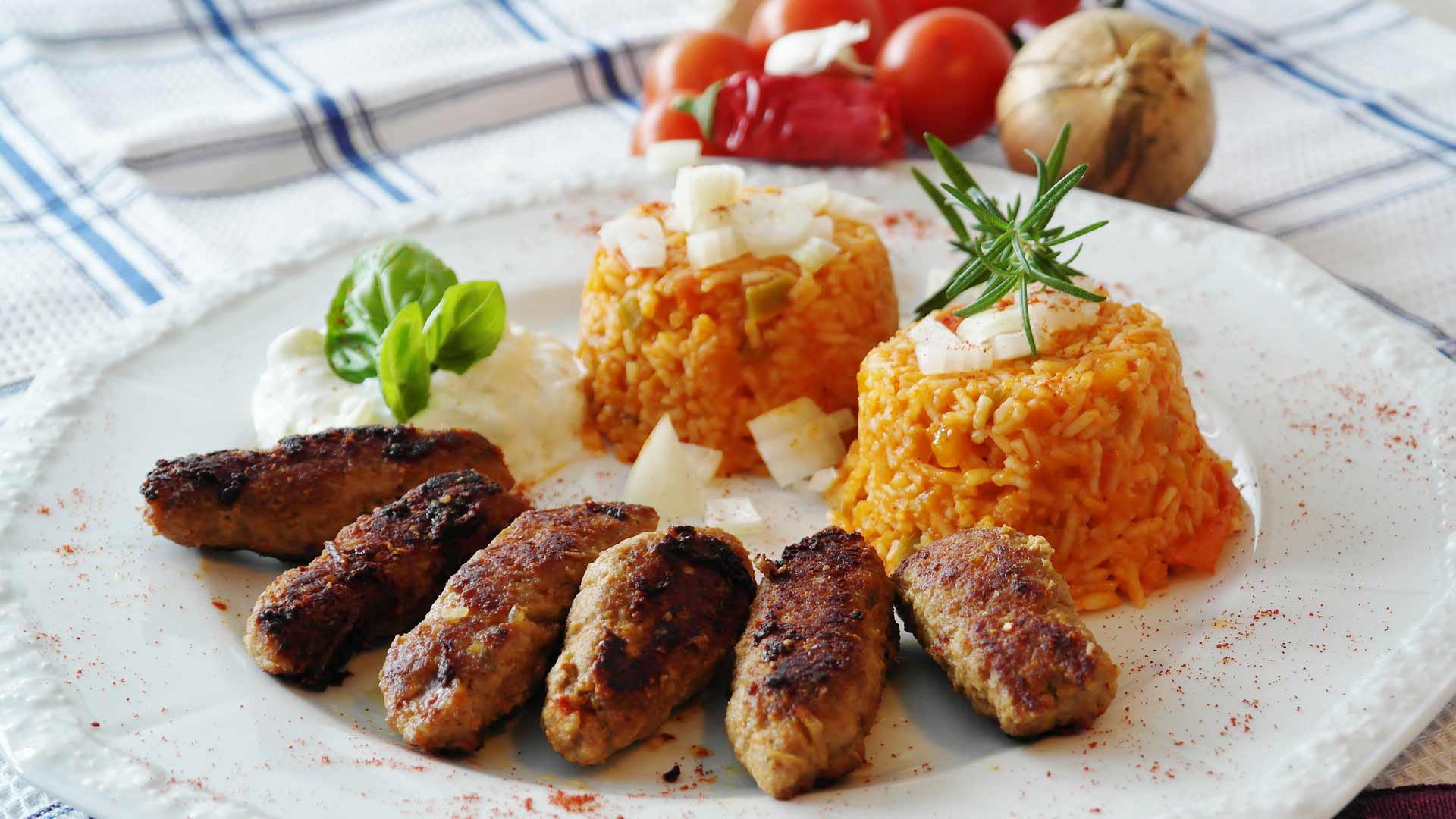 The great influence of Byzantium on Serbian cuisine was eventually replaced by the Ottoman one, which was felt most strongly in Sandzak. The northern parts of the country were not under strong Turkish influence, and since the 18th century, there has been a strong Austrian and German influence, when these parts fall under Austrian rule. The autochthonous fruits that grew in Serbia were apples, pears, blackberries, blueberries, and strawberries, as evidenced by the existence of Jagodina. The Turks bring medlar, apricots, and various types of plums to this area. They are also "responsible" for the small revolution in nutrition before the revolution that happened with the appearance of potatoes, and that happened when they brought rice to the Balkans.

From the west, dishes such as dumplings, mileram (cream), steaks, butter, etc. arrive in this area. Also, under the influence of Western cultures, breakfast is introduced into the Serbian diet as a meal. Even at that time, the urban environment found it easier to accept the changes that were later accepted in more rural areas. It was in the cities that the intertwining of the influences of different cultures was most felt.

Differences in nutrition in urban and rural areas

In contrast to the cities, in the villages, the meal schedule was significantly conditioned by fieldwork. Usually, two meals are prepared, lunch and dinner. Around 11 a.m., a lunch made of cheese, proja, or pie was eaten. The main and complete meal was dinner after the fieldwork was completed. Dinner included a dairy appetizer, salad, proje or pie, cooked soups, and occasionally roasted or cooked poultry. In the summer months, a light snack was introduced, because at that time most works were done in the field.

Urban environments differed from rural ones in that the influence of a higher culture could be felt in them. Certainly, the urban environments were the first to accept innovations in food and were the generator of changes in eating habits in this area. In the 19th century in the city center, the meal schedule of one family was completely subordinated to the host of the house. Namely, since the host spent most of the day working, the first important meal was dinner. Lunch was significantly more modest and was rarely cooked.

At that time, cooking was done outdoors in earthenware pots, and that is why there was a lot of "furundžija" in Belgrade at that time. There was one in almost every street. Meals would be prepared at home and then taken to the oven for baking. As both Serbian and Turkish families brought dishes for baking, there was a lot of work for the bakers. Typical dishes that were brought were đuveč, gibanica, pilaf, moussaka, lamb, turkey on podvarak.

In the kitchens in the 19th century, dishes such as meatballs, sarma, đuveča, jani, papazjanija, pilaf, and various soups were prepared. These were mostly Greek-Oriental dishes. Such were the sweets - of the oriental type, and among the most popular were baklava, gurabi, thallium, and alva. Only later, in the second half of the 19th century, strudels and donuts appeared in this area under the great influence of Western countries. 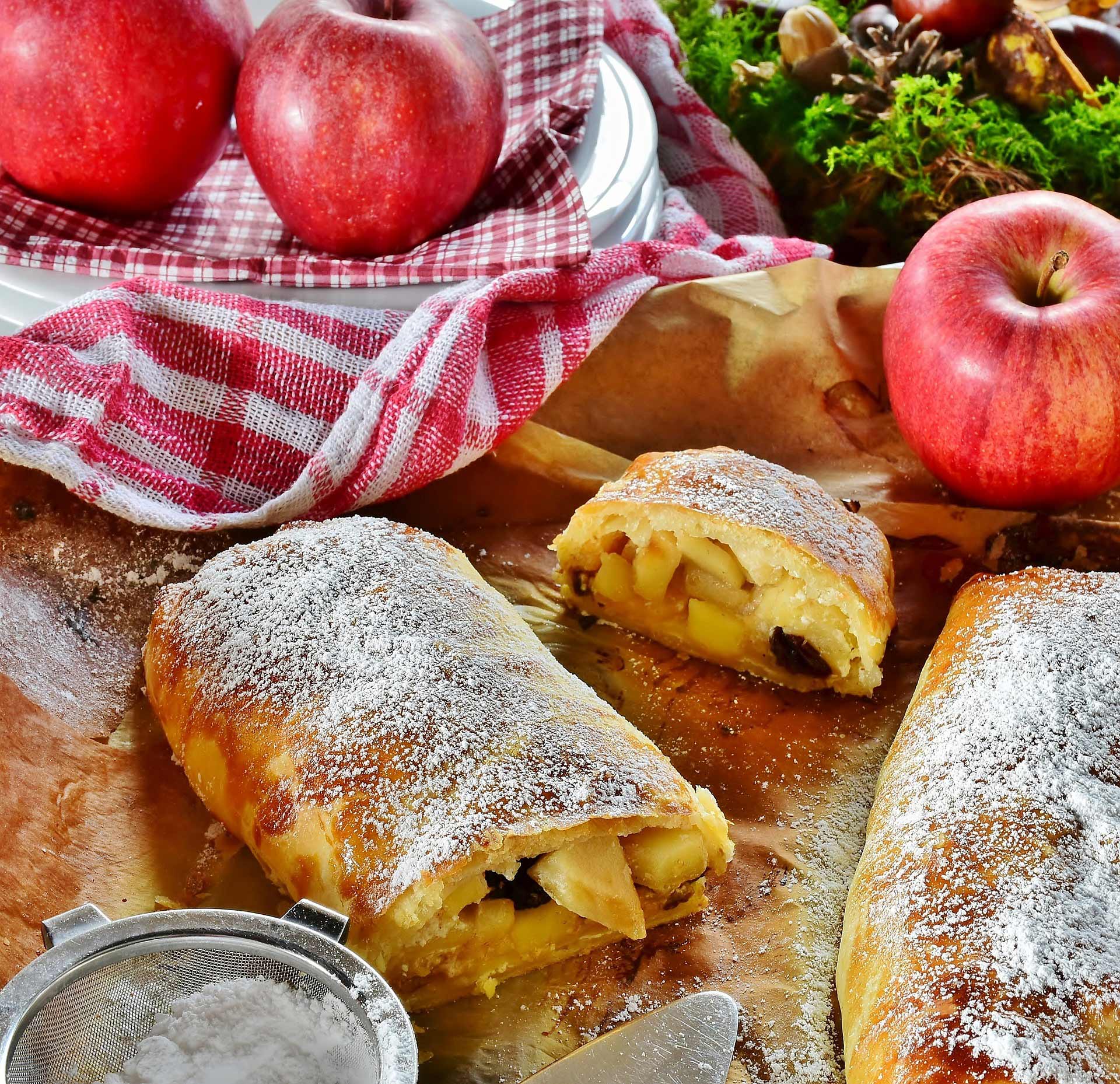 Rakija in the 19th century

The drink that we have considered traditional for centuries carries a really interesting story. It's about plum brandy. Namely, at the end of the 19th century, the disease of phylloxera attacked the vineyards, destroying them almost completely. The production of wine and grape brandy is significantly declining, and more and more people are turning to plum growing (check out our article about Serbian brandy - rakija)

Who knows, if that unpleasant event had not happened, we might not be known today for plum brandy, but wine and grape brandy. In any case, „plum brandy“ has become the most popular rakija in Serbia and one of the most famous products from Serbia.